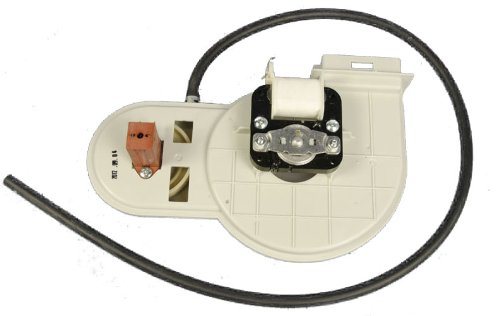 The circulation motor assembly in your dishwasher circulates warm air when the drying cycle is engaged. Not only does this dry your dishes before any water spots can dry in place, but it also helps prevent the buildup of mold in the moist environment. But if the circulation motor assembly fails or the terminals short out, the dry cycle won’t work. If your dishes are coming out of the dry cycle still dripping wet, turn on the dry cycle and listen for a motor and blowing air. Silence means it’s time to replace the motor assembly. Order part #5835ED2002D for most LG dishwashers. Then follow these steps to install the new part by yourself. All you need is a flathead screwdriver and some time.

Before you start dismantling the appliance, make sure the power cord is unplugging. Just turning the machine off isn’t enough, especially because you’re going to be disconnecting several wires.

2. Dismantle the dishwasher door to access the circulation motor assembly.

The circulation motor assembly is inside the dishwasher door, partially behind the control panel. In order to remove it, you have to open up the door panels.

To start, open the door. Remove the vent cap in the door by twisting it counterclockwise and pulling it away. Then also remove the twelve screws around the interior perimeter of the dishwasher door. Once the inner door panel is loose, close the door. But as you do so, make sure you hold the newly loosened interior panel, too, so it doesn’t fall.

Next, remove the exterior door panel. To do this, pull the bottom edge of the exterior panel away. It should easily snap free of the holding tabs. Then let it slide down until it’s free of the top groove. Pull the panel away and set aside

that, remove the brace near the bottom of the dishwasher. This is the metal rectangle that runs the width of the machine. Remove the screws holding it in place on both brackets at the ends. Then lift one newly freed edge from one of the brackets so you can slide the other end up and free. Set the bracket aside. Then follow the hanging wires up to the bottom of the control panel. Disconnect the blue and red wires from the wax motor next to the lid switch at the top. If they won’t easily disconnect, use a flathead screwdriver to pry the harnesses free. Also, remove the gray and red wires from the motor in the middle of the door.

this is your first time working with appliance wiring, take a picture before you disconnect any wires. Then you have a guide showing you which color wires go where when you’re installing the new part.

First, separate the plastic tube from the old motor assembly. To do that, pry the tube free of the glued end of the assembly with a flathead screwdriver. Also, release the locking tabs as you cut through the glue. Make sure you don’t damage or puncture the tube

new sealant around the edge of the plastic tube. Orient it so it curves to the left or away from the assembly and then insert it into the port of the new circulation motor assembly. Add the O-ring into the circular vent on the back of the assembly. Then turn it so the side with the O-ring faces the interior of the dishwasher. Lift the assembly up so it clicks into place behind the control panel. Once the new part is in place, reconnect the wiring. Connect the gray and red wires to the motor. The gray should go in the back and the red belongs in the front terminal. If you’re not sure, look at the picture you took earlier. Also, reattach the wires to the wax motor with the blue wire running to the left terminal and the red wires to the right.

you have an older model of dishwasher, you’ll have seen that your new circulation motor assembly has a drain hose that your old part didn’t. This drain hose doesn’t need to connect to anything. Just thread it down behind the wires and lay the end on top of the slot at the bottom of the door.

sure long plastic tube sealed to the motor assembly is in place on the left side of the door and behind the brace’s left bracket.

Start by reattaching the brace along the bottom of the door. Attach the left side first. Thread the brace behind the dangling wires. There are a small cutout and tab near the left end. The protruding tab should face the interior of the door and slide under the circulation motor assembly’s plastic tube to help hold it in place. Make sure the tab is under the tube before you push it fully to the left in the bracket. Then lower the right side into the bracket. Align the screw holes and retighten the two screws on both brackets

Next, reattach the outer door panel. Slide the top edge into the groove behind the bottom of the control panel. Then press the bottom down until it clicks into place.

After that, open the door. Make sure you hold both the door and the inner door panel as you lower it so nothing shifts. Reattach all twelve screws around the interior perimeter. Also, reattach the vent by setting it in place and turning it clockwise. If the resistance is too much, make sure the edge is fitting into the groove and push the tab with a flat head screwdriver for a stronger grip. Plug your dishwasher back in

that your dishwasher is back in working order, go to Authorized Service for more guides and repair tips. We also have expert technicians standing by.