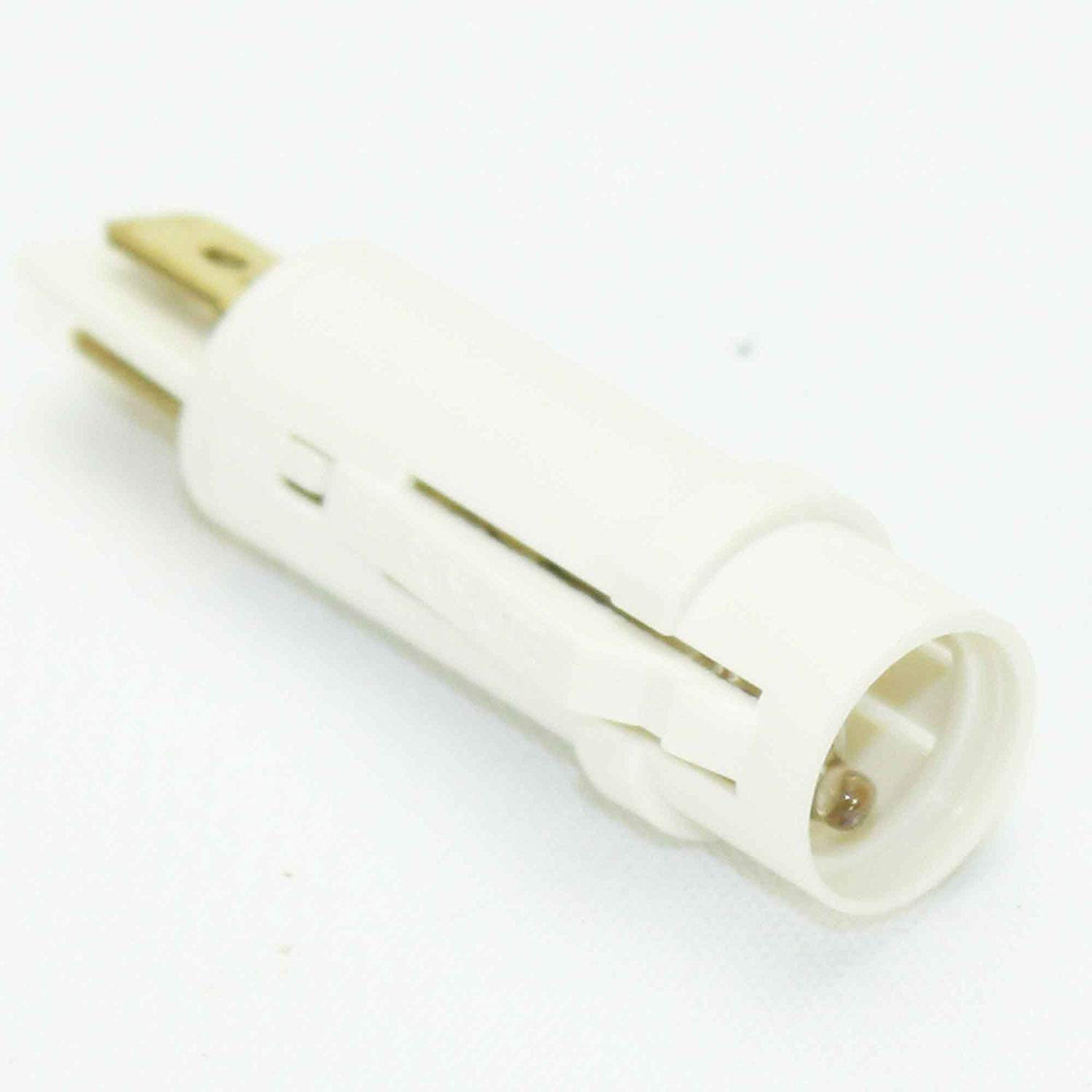 Your cooktop’s indicator light is supposed to let you know when one of the burners is on. But if that red circle doesn’t light up when a burner’s heating up, the indicator light has failed. You can replace it yourself with just a few tools and a new indicator light. Order replacement part #WB25T10012 for most GE electrical cooktop models. Then follow these steps to replace your broken part.

1. Unplug the electric cooktop (or flip the circuit breaker).

Whenever you’re making appliance repairs, make sure you separate the appliance from its source of power before you start. This applies to any repair on any appliance so you stay safe. If the cooktop is wired right into the house, flip the associated circuit breaker.

During this repair, you will be opening the cooktop and disconnecting wires. Unplugging the appliance instead of just turning it off is vitally important.

2. Lift the cooktop free of the countertop.

Next, run a putty knife under the edge of the glass to break the seal of the foam tape on the countertop. If the tape’s stickiness is weak, reach underneath to simply pop the cooktop free

that pick up the left edge and slide a wooden slat between it and the countertop to elevate it above the cutout in the counter. Do the same on the right side. This gives you plenty of space to work without having to move the whole cooktop.

First, remove knobs from control shafts. They should slide free with a bit of pressure

Next, look underneath the glass for screws that attach the top to the chassis. Remove all of the screws on all four sides of the chassis

that, you’re going to separate the edges of the glass top from the top lip of the chassis. There is more tape along this edge. Carefully pry glass top off with a putty knife as necessary.

the middle element free of the posts and shift it slightly aside for more space next to the switch box, which you will be opening.

Find the three screws that hold the box’s lip to the bottom of the cooktop. They may be concealed under the insulation layer. Remove them and set them aside. Next, swing the top of the box upside down and lay it where the middle element is typically housed. In the center of the box cover is the indication switch, and it is connected to two red and two yellow wires

Use a flathead screwdriver to pry the red wire bit away from the light. Repeat to remove the yellow wire bit

After that, in order to separate the indicator light from the box cover, you will need to release the two plastic tabs that hook it into place on the other side of the cover. Flip the box over on top of its housing without closing it, and use a flathead screwdriver to depress the two white plastic tabs along the circular edge. If you’re not sure which part it is, it is the solitary white circle with the shaft on one side and six white circles on the opposite side

you depress the two plastic tabs, push the indicator light down into the cover box. Flip the box cover back upside and find the completely loosened light. Pull it out and set it aside.

Line up the light with the center hole. Push it through the metal until the tabs click into place

Next, reattach the wires, with the double yellow bit on the bottom and the double red bit on top. Press the wires firmly into place

that, put the box cover back on the mount and line up the screw holes around the edge. Tighten the three screws to secure the box.

put the middle element back into position on the posts.

First, replace the foam tape that may have been damaged during the disassembly process. To do this, flip over the glass top so you can see the underside. Scrub away any foam type residue. Then precisely cut and measure foam tape to outline the bottom edge of the glass top

the corners, make sure there aren’t gaps. Also, make sure they don’t overlap. The foam tape needs to provide a water-resistant seal that keeps the interior of the cooktop safe over time.

Once all four edges have new tape, carefully flip it over and align the shafts with the grommets. Carefully lower it straight down so the shafts slide through the grommets

, re-tighten the screws around the chassis perimeter.

Lift up the cooktop one side at a time to remove the slabs and lower it into the cutout in the counter. Make any readjustments to the cooktop’s position it needs to be straight and firmly in the cutout. After that, go under the counter. Bend the brackets you straightened earlier at a sharp angle so they press against the underside of the counter. Retighten the screws in each bracket

, slide the knobs back onto the shafts. To do so, align the shape of the knobs’ holes with the orientation of the shaft so you don’t force them on and damage the knobs.

Then flip the circuit breaker or plug the cooktop back in. If you want to test the new part and be sure it’s in working order, turn on each of the elements and check to make sure the new indicator light turns on with each element