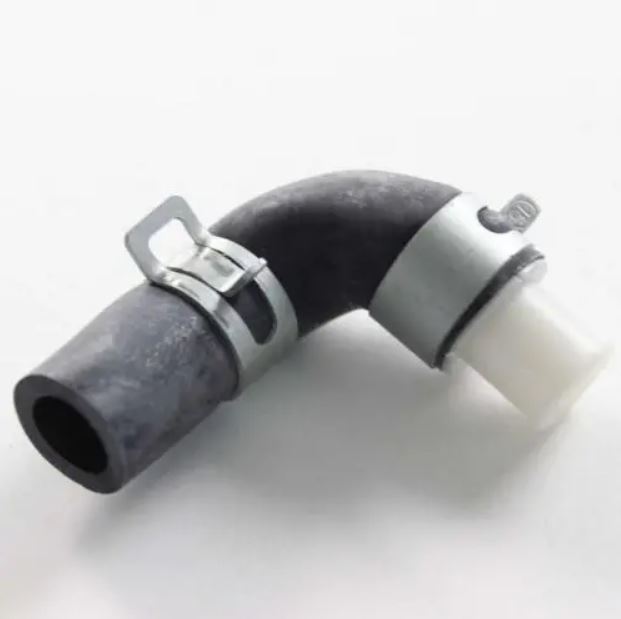 Leaks are one of the most common problems with washers, and they can be one of the most damaging problems if you don’t immediately notice. If you see water draining near the front of the machine, the drain hoses around the tub might be at fault. Sometimes they leak from a clog or tear. Once the drain hose is torn, you have to replace it. Order part #5215EA4001G for a drain hose for your front-loading LG washer. Then follow these steps.

1. Unplug the washer and turn off the water.

Always unplug an appliance before you start making repairs. For this repair, you also need to shut off the water supply to prevent the risk of a leak as you remove the drain hose

the repair, you will also need to tilt the machine back. If there isn’t room where you washer usually sits, disconnect the water supply lines and the drain hose so you can move the washer.

Washer parts are locked together. You will need to remove a lot of different parts before you can remove the front access panel

Next, open the washer door and pry up the boot seal clamp. This is under the first rubber edge of the outer boot seal. Just pry it out with a flathead screwdriver and set it aside. Now you can peel the right side of the boot seal out of the way to remove the door switch. Loosen the two screws holding the lid switch in place and then push it into the machine. Close the door

After that, get the top panel out of the way. Move to the back of the washer and loosen the screws holding the brackets to the rear access panel. Then slide the top panel back an inch and lift it free

you can remove the front access panel. Remove all of the screws around the perimeter of the front panel; there should be six. You may need to secure it in place with your hip or hand as you loosen the last screws. Tilt the panel forward and lift it off the bottom groove. Then set the panel aside.

Set a block or sturdy box a foot behind the machine. Then tilt the washer backward so the on the box. Make sure it doesn’t pinch any hoses or the power cord

the machine is at an incline, you can start replacing the drain hose. Locate the broken or cracked part. There are two hose clamps. Use a pair of pliers to compress the hose clamp closest to the boot seal. Then pull that end of the small drain hose completely free. Next, reach deeper between the boot seal and the frame to locate the clamp that secures the other end of the hose to the appliance. Use the pliers to also compress this clamp and pull the second end of the hose free. Keep track of the clamp near the outer boot seal which is completely detachable, the drain hose, and the two clamps connected to it. You will need the clamps later, and you don’t want them rattling around the machine.

of the most common causes for a leak near any of these drain hoses is a clog in the hose. While your hose might have cracked or torn, there may still be buildup. Use a pipe cleaner or (gently) a screwdriver around the ports to remove any buildup.

the new drain hose is fully in place, tilt the washer back up until the bottom is resting on the floor.

Work backward from the second step

by resting the front panel on the bottom groove. Then push it until it’s flush with the front of the machine and secure it with the six screws.

, set the control panel into the groove on the top of the front panel. Push the wiring into the cutout. Then tilt the panel until it’s flush with the washer. Press it down until the locking tabs engage. Also, tighten the screw in the right corner to fully secure the control panel.

that, reconnect the wiring. Connect all three wire harnesses on the other side of the panel. Then group the wires together and secure them with a zip tie.

the detergent compartment. First, realign the housing with the cutout in the control panel and push the housing into place until it clicks. Rethread the two screws to hold it in place. Then slide the drawer fully into place.

the outer clamp is almost fully in place and can’t go any further, use pliers to stretch the spring and push the rest of the clamp into place. Make sure you don’t pinch or tear any part of the boot seal during this process. Check over the seal to make sure it’s smoothly in place and can’t be tugged free.