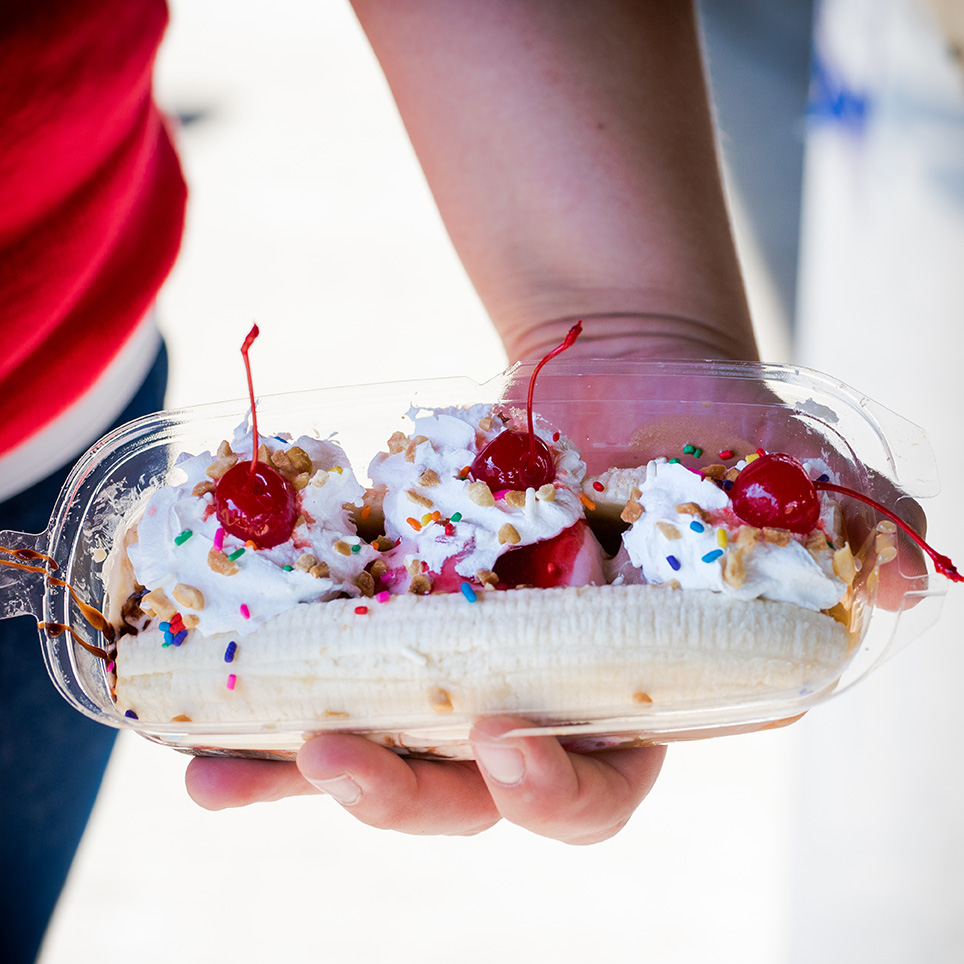 After the gray days of winter, many Dayton families look forward to spending more time outdoors. That’s one reason why every summer is filled with local festivals and fairs that provide fun for all ages. Here are 10 of our favorite annual events.

The Dayton area is famous for inventions that changed the world, especially in aviation. However, you may not know that we’re also one of two birthplaces of the banana split. While a Pennsylvania man had a similar idea for cutting a banana in half, Ohio restaurateur Ernest Hazard put the cherries on top. Head to nearby Wilmington for a free celebration complete with games, rides, entertainment, and food from the 50s and 60s. Don’t miss the banana split eating contest and the build your own banana split booth, as well as pony rides and a petting zoo. (Banana Split Festival, Wilmington, June 7 and 8 – Free)

Acres of organic lavender await you just about 30 minutes from Dayton. If you haven’t discovered Peaceful Acres Lavender Farm yet, the festival is a great time to start. Walk the fields and learn about the benefits of lavender as you enjoy food, vendors, u-pick, workshops, yoga, massage therapy, children’s activities, music and more. (Summer Solstice Lavender Festival, Martinsville, June 15 – Free)

Does your family love trains? So does Dayton History and Carillon Park Rail & Steam Society. Join them for miniature train rides, model train displays, historical exhibits, and unique railroad merchandise. There is food and banjo music too! (Rail Festival at Carillon Park, Dayton, June 22 and 23 – $10 for adults, $7 for children 3-17, children under 3 free)

Bark in the Burg:

Your dog’s part of your family too. Let him enjoy some friendly competition while you raise money to support the Humane Society of Greater Dayton and the new local dog park. Register to walk or run in your choice of 3 races covering 5K, 2 miles or 1 mile. There’s also a timed agility course and special contests for best costume, best howler, best groomed, silliest pet tricks, and dog owner lookalikes. Dogs must be at least six months old, with current ID tags and up-to-date shots. (Bark in the Burg at Miamisburg Community Park, June 29 – Free entry, $15 to $25 race fees)

Get a head start on July 4 at the Centerville Americana Festival where the fireworks start at 10 pm on July 3, the night before the festival itself. More than 85,000 people turn out for the evening show as well as the 5K run, parade and street fair the next day. Enjoy more than 120 floats, bands and other parade units, as well as about 300 craft and food booths, along with staged and strolling performers, a special children’s area, and the Antique, Classic & Custom Car Show. (Centerville Americana Festival, July 3 and 4 – Free)

How come ice cream costs so much more when you buy it at a shop instead of eating it at home? Well, here’s your chance to get a bargain on $3.25 sundaes, and your local city officials will serve them to you. It’s all waiting for you at this annual social in Riverfront Park. Plus, the music is free, courtesy of the Kettering Civic Band, Miami Valley Music Men, and the Star City Community Band. Meanwhile, your kids can play on the splash pad. (Miamisburg Annual Ice Cream Social & Concert, July 7 – Free)

Watch 30 participants race for glory in this sanctioned hot air balloon competition. Winners receive the Ohio Challenge Trophy and a chance to compete nationally. Additional activities include a night balloon glow starting at dusk, a car show, fireworks, outdoor concerts, food, crafts, and carnival rides. If you want to take to the air yourself, vendors will be on hand to provide tethered and hot air balloon rides. There’s also an antique open cockpit biplane ride so you can sightsee as you travel far above the Ohio country side. Keep in mind that weather conditions can affect these activities. (Ohio Challenge Balloon Festival, Middletown, July 20 and 21 – $5 adults, children under 12 free)

Irish music is the main attraction at this celebration of Celtic culture, where the Celtic breakfast and Gaelic Mass on Sunday morning are very popular too. You’ll find the usual festival fare plus plenty of opportunities to sample authentic Celtic food and beverages and brush up on Irish history and other subjects. Watch for bagpipers and flagbearers leading The Parade of Kilts or join in if you own one. yourself. Kids will love The Rainbow’s End Children’s Area with games, picture boards, and Celtic crafts and tattoos. Everyone will want to pet the magnificent Irish Wolfhounds. As for the music, the returning headliners are Gaelic Storm, Scythian, Rory Makem, Socks in the Frying Pan, and The Fitzgeralds. They’ll be joined by two newcomers – Cuig, a five-piece band from the North of Ireland, and Doolin’, specializing in Irish music with a French touch. (Dayton Celtic Festival, July 26-28 – Free)

The Montgomery County Fair enters its 167th year with a new home. It’s now in Jefferson Township, just a little over 5 miles from its former location in Dayton. Some things you’ll probably like are the 2 new air-conditioned buildings and hundreds of more parking spaces. While you’re experiencing the extra convenience and comfort, you can rest assured that your favorite fair activities have been preserved. Treat your family to games, rides, entertainment, food, along with 4H, junior fair, livestock, a petting zoo, dog and flower shows, harness racing, a circus, and a rodeo. (The Montgomery County Fair, Jefferson Township, July 8-14 – Entry fees to be announced)

Sure, it’s not health food, but it’s only once a year. Visit the Fraze Pavillion in Kettering for the sixth annual Bacon Fest. Fifteen local restaurants will present dishes heavy on the bacon for your eating pleasure while you listen to popular local bands. (Bacon Fest, Kettering, August 17 – Free)Authorized Service has provided remarkable major household appliance repair in the Dayton area since 1931. Contact us to keep your appliances running efficiently all year long.

How to Replace a Refrigerator Compressor

How Much Water Does a Dishwasher Use?

How to Fix a Dryer Not Spinning

How to Reset Your Samsung Refrigerator

How to Replace a Washing Machine Belt

How to Fix a Samsung Dryer Not Heating

How to Replace a Refrigerator Compressor