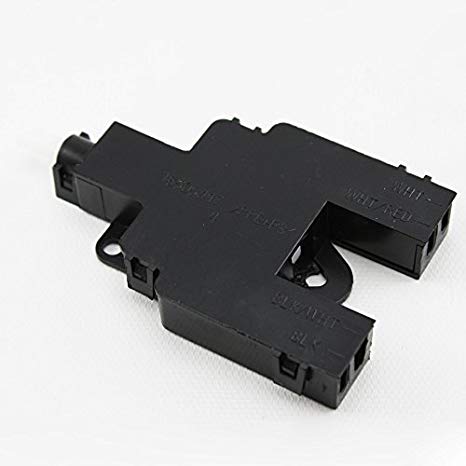 Your dishwasher is built so the water cycles won’t turn on if it senses that the door is open. This prevents accidental water damage, especially if you need to open the door after a cycle has already started. Unfortunately, it also means that your dishwasher is dependent on being able to recognize when the door is shut. That’s controlled by the door interlock switch at the top of your GE dishwasher’s door. Once it breaks down or shorts out, your machine can’t start or continue a cycle. Order part #WD21X10169 to get a new door interlock switch. Then follow these instructions to install it yourself.

Every time you plan on opening up an appliance, don’t just turn it off. Make sure the appliance is completely unplugged. During this repair, you’re going to be disconnected wires and removing electrical parts, so this step is absolutely essential.

Now you can start to remove the actual door interlock switch. Locate the door interlock switch in middle, which looks like an upside-down ‘Y.’ Remove the screw between the two lower legs and carefully set it aside. Don’t let it fall inside the door. Then pry the six locking tabs around the edge of the door interlock switch cover open with a flathead screwdriver.  Set the cover aside. Behind the top portion of the cover, you’ll find a spring and a white plunger. Use both hands to secure the two parts and remove them from the housing without letting the spring-fall down. The malfunction in this door switch was either caused by a switch or a worn or broken spring, so look out for sharp metal edges

Now you can remove the two box-like switches from the ‘legs’ of the Y-shaped housing. Take a picture of the wiring’s orientation on both switches so you put them back in the correct terminals on the new switches. Pull each of them out of the housing and then use a flathead screwdriver to pry the switch’s wire terminals free from the wire clips. Make sure the wires don’t slip inside the door either by taping them to the top of the door or carefully pushing a paper towel into the gap below them so they can’t fall. Repeat with both switches

loosen the screw in the top left corner of the housing to fully remove the old housing.

You can’t install the whole new switch at once. Instead, you need to pull the parts apart and install them one by one. To start, pry the top cover plate away by releasing the tabs. Set the cover, the plunger, and the spring aside. take the switches out of the housing

that you have dismantled the new door interlock switch, you can follow the previous step in reverse to install the parts. First, line the back housing up with the door and the screw hole. Make sure it’s straight and then retighten the screw in position to secure it.

, start installing the individual switches. Reconnect the left box switch’s wiring. The double black wire should go on the exterior or leftmost port. The black wiring with a white stripe should go on the interior port. Alternatively, use the picture you took earlier to make sure the configuration matches the previous setup. Once the wires are connected, push the switch into the housing. The top exterior corner should slide over a thin shaft and the wires should run down the ‘leg’ of the housing.

this step with the right switch. The double white wires belong on the exterior right terminal, and the double white and red wires belong on the interior port. Then, open the door a bit to get the latch out of the way. Orient the plunger and spring assembly so the spring is pointing down and the flat portion of the plunger’s shaft is facing towards the interior of the dishwasher. Carefully position the parts so it fits in the housing and the top of the plunger can strike the latch. As you position it, make sure you hold onto the spring so it can’t fall. Now that all of the parts are in place, make sure none of the wires or switches protrude from the housing and are fully installed. Reattach the front cover. Press it into position so all six locking tabs engage. Rethread the screw that secures the front housing cover at the apex of the upside down ‘Y’.Remove any towel you may have pushed inside the top of the door to catch falling pieces.

First, hold the control panel near the door and reinsert the wire ribbon into the wide middle terminal. Use a flathead screwdriver to make sure all of the locking tabs are engaged and it’s fully plugged in. Next, set the bottom of the control panel in the lip of the front panel. Then tilt the control panel until it’s flush with the door. Open the door at an angle so you can resecure all six screws you removed at the beginning of the repair project. Shut the door and plug the dishwasher back in. Your next cycle should start as soon as you press the button

you have more appliances that need repairs, contact us at Authorized Service here. We have repair guides and trained technicians who can help.